Like most beautiful things, Nanduti is said to have been born out of love... 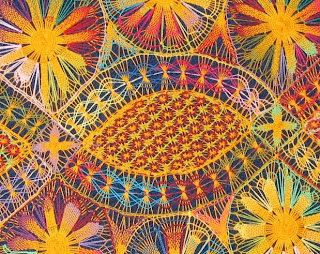 Two young men loved the Cacique's (Chief's) daughter. While he alone determined her destiny, he loved his daughter and desired her happiness. He devised a contest that would be sure to show which young man would be best suited to marry his daughter. Each one must bring a gift. But not just any gift. A unique gift. One that would cause the Cacique to release his daughter to marriage.
One young man was very rich, and there was nothing he could not buy. He gathered every kind of animal and prepared them to be taken to the Cacique.
But the other young man was beyond poor (you knew it would be so, surely). He had nothing, and no way to buy anything for his beloved. As he wandered through the woods, he looked up and saw an elaborate spider web hanging from a branch. He thought to himself, "How perfect! I will take this as my gift!" But as he reached up to grab it, it disolved in his hands. He left the forest weeping, completely defeated.

His mother heard his cries and found him. As he poured out his dilemma, she assured him that all would be well. She found another spider web and sat down to mimic it's pattern and create her own beautiful web. Using the hair from her own head, a stunning salt and pepper, she weaved the first nanduti.
When the poor young man presented his gift, the Cacique gave his daughter to him. Since that day women all over Paraguay have been creating nanduti out of lovely colored thread.
Nanduti means web in Guarani, one of Paraguay's two official languages.
Posted by Shilo at 3:27 PM

Hmm... so, he had his mom do it for him? Hmm.. well... still better than the traveling zoo the other man got!

I didn´t know that! It took a foreigner to teach me something about my own country! Loved that.

Thanks for sharing this beautiful story from here.

Beautiful blog by the way. :)

I just stumbled here looking up by googling nanduti. I lived there a long time ago (across the street from Centro Medico Bautista) and the legend we always heard was that 2 lovers were separated by the Triple Alliance War. She went looking for him, found him dead with a spiderweb woven across his face, and in her sorrow went home and copied the spiderweb. Is that legend still around? A Paraguayan Fan

Shilo
Washington, United States
Drawing in breaths of God's peace and learning to exhale with the same grace, this is where I wrestle with my humanity and thankfully, inevitably find that every need of my heart is met in God Himself. That you're here journeying with me? It's a gift! Thank you.

Why I Could Never Be a Missionary...but I Am

Creating Beauty for the Glory of God
My Perspective on Decorating

He's My Home
The Truth that Changed My Life